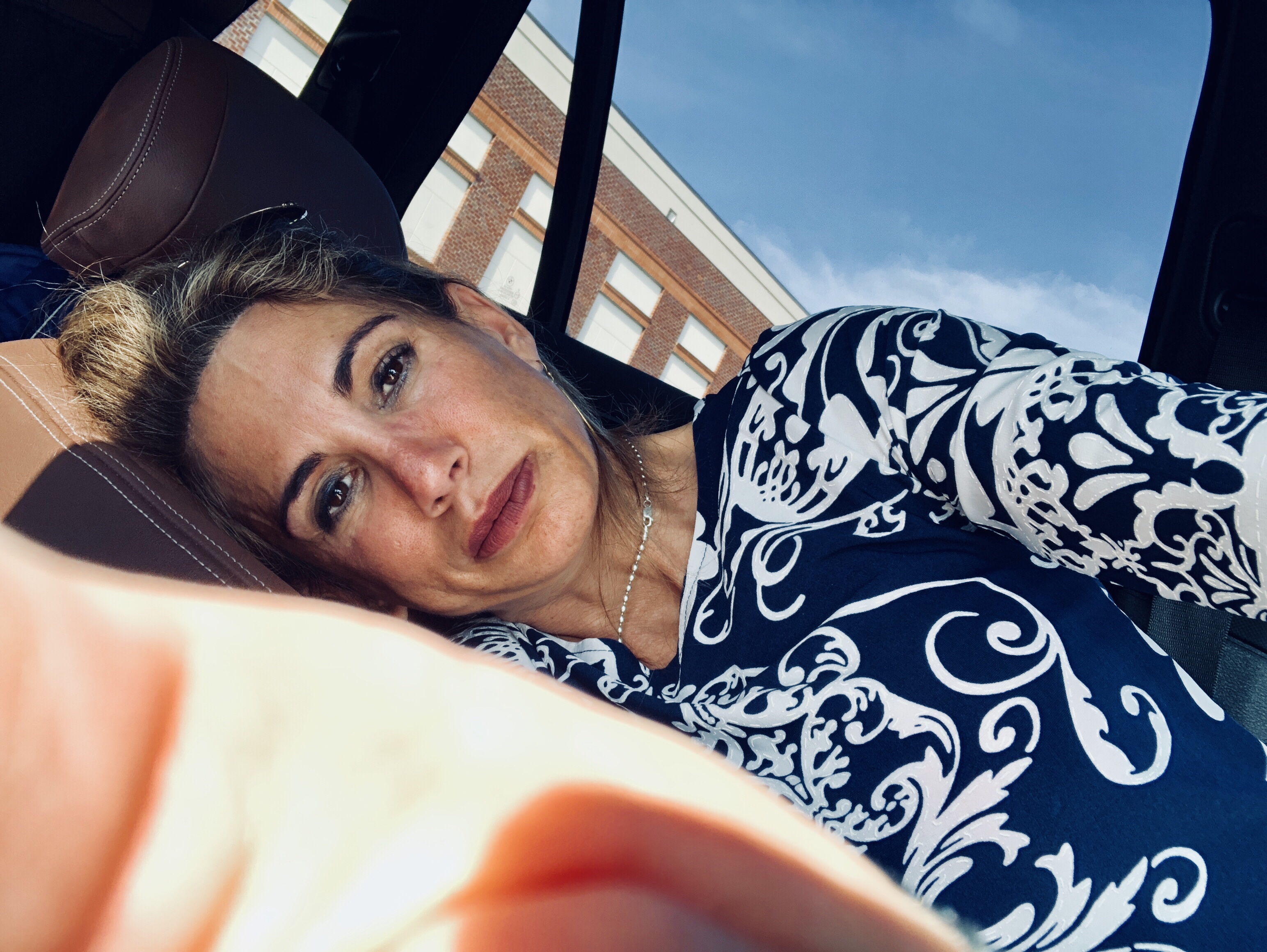 Lots of make up and a reasonably good hair day does not preclude me from sleeping in my car. It’s a skill.

I went to college with this guy, Ted, and he invariably drank until he passed out. Of course, that’s not what was remarkable. Ted could sleep ANYWHERE in any position. Fortunately for many of us, at that time social media didn’t go beyond a pay phone (*see below)and a Polaroid. My favorite was when Ted used a fully inflated basketball as a pillow. Snoring, with his mouth agape, his chin would literally come to rest on his chest. What a baller!

So, sleeping in my car. It’s a thing for me now. I cry in there too, but not often. Mostly, I just “tear up” when I don’t feel well and I get discouraged by this esoteric disease.

The other day I was in so much pain so reached out to both my primary doctor and Dr. Bonilla at Stanford. Flexiril doesn’t agree with me so I did some research. I read about a muscle relaxer called Soma. Apparently, this is or was commonly used to treat muscle pain and spasms commonly shared in autoimmune diseases.

I asked my primary doctor and Dr. Bonilla (via email) for a prescription of Soma and it must be akin to crack because I got stonewalled by both. I already have prescriptions for pain medicine but I try to avoid taking it and I hate the side effects.

My neck starts to spasm and then it gets stuck and it SUCKS. Dr. Bonilla called my primary-I’m grateful that a medical professional even takes such measures- and asked that her office call me to further discuss pain management options. No one called. Well, except me, the next day. Days later, after missed calls and obtuse emails and portals of questionable efficiency, I heard back. No, no and no.

What’s the deal with Soma?Apparently, it is highly addictive and dangerous when used in conjunction with other medications to the degree that you can pass out(on a basketball?) and your heart can stop. Well, we’ve heard enough of these stories lately and no one wants to jeopardize a career after trudging through medical school. And, from the patient’s point of view, that’s a largely undesirable, not to mention, irrevocable side effect. According to some randomly googled site (www.medicareinsights.com),

“Controlled substances are categorized into ‘schedules.’ Schedule I drugs are considered highly addictive with no medicinal purpose, whereas a schedule V drug has a relatively low potential for abuse and is recognized for its accepted medicinal use.  Prior to the DEA ruling, several states had already taken it upon themselves to classify Carisoprodol (Soma)as a schedule IV, controlled substance.” There are also several restrictions regarding prescribing parameters-as in only a certain amount of refills allowed within a tight timeframe. I believe it can’t be prescribed for more than two weeks at a time. For obvious reasons, it’s heavily policed by insurance companies and risk management concerns. So—I get it.

What I don’t get? Why couldn’t anyone just tell me this? Why the weird but not uncommon shirking and seemingly deliberate obfuscation?

Fortunately, I had a neurologist appointment the next day and explained the situation to her. She explained the controversy with Soma and prescribed Baclofen. Apparently Baclofen is not nearly as scandalous.

I hope I’m cured tonight! I hope I can run tomorrow. My husband asked me what I wanted to do this past Mother’s Day and the first thing that came to mind was…PLAY TENNIS!!

Since I began this post about 4 days ago, I haven’t experienced any really bad pain days, so no big-gun treatment warranted. Lots of fatigue and some genuine yearning to run and catch and throw and jump. When and if I try the Baclofen, I’ll let you know-straight up-if it helps and if I experience any side effects.

Until then, choose your pillow wisely, lace up your combat boots and kick ME in the ass.

*Phone booth: a partly enclosed, often freestanding, structure with an attached phone for public use

*Phone booth: a partly enclosed, often freestanding, structure with an attached phone for public use

View all posts by colettegirl

This is a text widget, which allows you to add text or HTML to your sidebar. You can use them to display text, links, images, HTML, or a combination of these. Edit them in the Widget section of the Customizer.